So as my bio says…in addition to everything else I try to do, I’m a volleyball fan and team scorekeeper.

The Daughter, plays for the Aurora Storm- 17U Bolts. Last weekend, we were in Edmonton, Alberta for the Canadian Open in Volleyball, also known as the Nationals. There were eighty 17U Girls teams from across Canada (okay, admittedly about half were from BC and Alberta), and a total of over 250 teams with boys and girls aged 16 – 18. 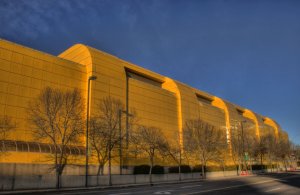 I can’t say I saw much of Edmonton, really just my hotel, the West Edmonton Mall, the Saville Centre and the Butterdome.
Why is it called the “Butterdome” you ask? Well just take a look….

The girls played awesome coming in fourth overall. We lost to the #1 ranked BC, #1 ranked AB and #1 ranked MA team. Considering we went in as the #2 Ontario team, and were the only Ontario team to make it to the semis, we were still pretty happy.

And while the girls didn’t get a medal, I did have a very proud mommy moment when The Daughter was called as one of the events All Stars. Or, as I like to say, one of the top 6 girls out of about 800.

2 thoughts on “This week: Volleyball”