Today we move away from Candy Hearts to Demon Kisses. Please join me in welcoming Karilyn Bentley and her new release, DEMON KISSED.

Blurb:
Gin Crawford, the world’s latest demon huntress, has no time to mourn her dead lover as she’s called in to determine why a demon attack occurred at the local medical school. And not just any demon, but the one demon that gives her demon-killing bracelet the shivers. A dead professor, a lab full of missing anthrax, and a demon who turns good people into minions complicate her life. Can Gin and her mentor Aidan Smythe solve the mystery of the missing anthrax and the identity of the demon before someone else dies?

Excerpt:
The scent of sulfur hangs in the air like a demonic stink bomb. I want to slap a hand over my nose, but no one else seems affected by the stench. Must be a demon huntress thing.

“If you don’t like my new title, then stay out of my mind.”

He glares. I swallow. Cross my arms. Refuse to take a step back. I’m learning not to be intimidated by his anger. Go me.

My justitia vibrates, throwing me out of my internal battle, pulling me back to the land of death and minions. The blob of colors pulsates, a glowing reminder of a moment of terror. The moment the demon appeared to the grad student.

Granted, I’m still taking Demons 101, but I thought demons formed minions in private. Usually after the human committed a crime, not before. A tryout, so to speak. And maybe that happened, but it sure seems to me like the black blob of demon force appeared to the grad student smack in the middle of the hallway.

Or maybe that always happens, and I just now noticed it.

The justitia’s vibration grows stronger, trembling my arm, my veins. Not its normal excited tremor upon seeing a minion or demon. A rush of images spikes through my mind, scenes of terror coupled with blood and death, memories of the justitia’s former wearers captured in time by the entity in the bracelet.

I’m not the only one freaked out by the colored blob. How bad was this demon to scare a justitia?

More on Karilyn:
Karilyn Bentley’s love of reading stories and preference of sitting in front of a computer at home instead of in a cube, drove her to pen her own works, blending fantasy and romance mixed with a touch of funny.

Her paranormal romance novella, Werewolves in London, placed in the Got Wolf contest and started her writing career as an author of sexy heroes and lush fantasy worlds.

Karilyn lives in North Texas with her own hunky hero, a crazy dog nicknamed The Kraken, and a handful of colorful saltwater fish.

Good morning (or afternoon, or evening),

Today I have with me Karilyn Bentley and her new release, THE DETECTIVE’S DRAGON. This is third book from Karilyn in the Draconia Tales series. 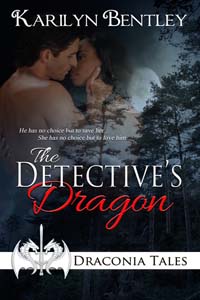 Here is a blurb from The Detective’s Dragon:

As a Halfling with little magic, Jamie is barely considered a Draconi, his sole talent finding jewels and lost people. But when he dreams of a human female in trouble, he has no choice but to save her, even if it means crossing dimensions into a different realm. Unfairly accused and placed on administrative leave, Detective Ruby Parker is determined to regain her position on the Denver police force. When an attempt to kidnap her fails, she must learn to trust the stranger who appears from nowhere to help her. Unlike in Draconia, Jamie’s powers work in Parker’s world, his longing to wield magic finally fulfilled. But is working magic worth leaving his family and friends? When Parker realizes she loves Jamie, she must make a choice, follow her heart to a different world, or remain alone and attempt to regain her beloved job. What happens when the one you love lives in another dimension?

Hey Karilyn, Do you have a process for coming up with character names and book titles?

Well, I don’t consider it a process so much as fitting the names to the story. For the Draconia Tales series, I tried to match male names to Old Norse names. The titles have to do with both the hero and the heroine, although it’s usually more applicable to one or the other.

(As I said before, this is Karilyn’s third book in the Draconia Tales Series. THE DETECTIVE’S DRAGON follows DRAGON LOVER and WARRIOR LOVER. All available from Wild Rose Press.)

Interested in a little more? Here is an excerpt from THE DETECTIVE’S DRAGON:

The squeak of hinges snapped Parker’s attention to the door. Hottie stood in the doorway, one hand on the frame, the other on the handle, a look of determination plastered on his face. A look she was familiar with. A look she saw reflected in her mirror on a daily basis. A look mirrored on her coworkers’ faces when working a case.

A look she never thought to see directed her way.

Which was a bit unnerving, but not nearly as unnerving as the realization he’d followed her. He stood in the doorway like he owned the place. Or owned her.

Her limbs shuddered like a car without shocks. He. Followed. Her. Was he stalking her? Was he with the ones who tried to kidnap her? What was he doing here? More to the point, how did she get rid of him? Her muscles might be coming out of a deep freeze, but that didn’t mean she could hop off the bed and toss him out the door.

Where was the damn call button?

Parker patted the mattress. Hottie took a step closer. Then another. No button. Her heart shook an uneven rhythm, the beat a warning drum in her veins. Her hand moved faster against the mattress, searching, seeking, not finding.

She stilled, her hand paused mid-pat as if his words flipped her off switch. Deep and soothing, his voice stroked across frazzled nerves, slowing her racing heart. If he could bottle that sound, women would fall at his feet.

Well, I’ll certainly take a bottle of that!!

Before I let you go, Karilyn, let’s try one more question.
What’s your favorite movie and why?
I LOVE the Star Wars movies. I know, I know, that’s not one (I’ve never been very good at math!). The movies fascinate me because they came out when I was a kid and at the time I thought they were the classic story of good vs. evil. But then they released the first three and although I didn’t like them as much as I did the original three, I loved them because they were the story of Anakin Skywalker, from how he started life to his fall from grace, to his turn to evil and his redemption. The telling might not have been the greatest, but the character arc just blew me away.

I remember going to see the first one at someone’s birthday party in elementary school, and being blown away!

Thank-you Karilyn for stopping by today.
And thank-you blog visitors for visiting with Karilyn and I.

If you like to know where to you can get a copy of THE DRAGON’S DETECTIVE, or where you can find out more about Karilyn, just keep reading. 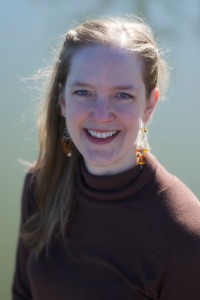 Karilyn Bentley’s love of reading stories and preference of sitting in front of a computer at home instead of in a cube, drove her to pen her own works, blending fantasy and romance mixed with a touch of funny.

Her paranormal romance novella, WEREWOLVES IN LONDON, placed in the Got Wolf contest and started her writing career as an author of sexy heroes and lush fantasy worlds.

Karilyn lives in North Texas with her own hunky hero, a psycho dog nicknamed Hell Hound, a crazy puppy, and a handful of colorful saltwater fish.